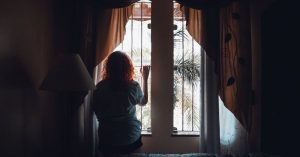 “I thought I was fine until I hit the tar road to go home after leaving the quarantine facility. I felt emotional, got lost and ended up in Pretoria. I was driving around in Pretoria for around an hour before I could find my way out to go home. I still have sleepless nights and nightmares and have sought professional help to help me deal with that.”

“Having suffered from depression before, I know when depression will set in again. I refuse to take medication though being captivated has definitely taken a toll on my mental state. The psychological impact of what I’ve been through will take some time to heal. Even though I think it was no big deal, my thoughts, dreams and behaviour now shows otherwise. I have become anxious in situations where I usually would have thrived. I am not my cheery self and I feel guilty for not being able to give my children 100% of mommy. Even though there was no violence, I cannot stand to watch an action movie or even a cartoon where a character dies. The negative and emotional impact it has on me now far surpasses the response I had in the past. This implies that I have suffered a trauma, and I now must deal with it to the best of my abilities. Mozambique has always held a special place in my heart and but after this I have become wary of thinking about my next holiday there.”

“Since I have been in quarantine, I have been suffering from sleeplessness and as I’m writing this, there has been no improvement. I sleep at most three hours a day and this is having a negative effect on my studies.”

“The experience of quarantine is something you can’t understand unless you’ve been there. Our experience at Emperors Palace was emotionally distressing. The room was small and we were not allowed to leave our room. Every day announcements were made on the hotel intercom system in an extremely condescending tone, constantly reminding us that we should be thankful to those serving us. All this leaves a person feeling that some sort of injustice is being done to them, that they are being held captive at the whim of their captors, and that their emotions are being played with … it leads to despair.  I had dreams and nightmares about this experience. I would wake up crying, and even now I feel the emotion in my body welling up when I think of being back there.”

“I am a former ‘prisoner’ of the Emperors Palace quarantine facility. We were not allowed to leave our rooms or go outside for fresh air and sunshine, we are literally lying in our beds all day. After much fighting, they allowed us outside for 20 mins, 2 days out of 11 days, with police officers to escort us on the property. We were constantly being punished for something and there are continuous mind games. People were starting to break down, both emotionally and mentally. My fear was that someone was going to die in that facility, either from not receiving medical care or medication, or from taking their own life. I was released from the facility 5 days ago and have since had to seek therapy. I am currently seeing a psychologist. While in the facility I lost a friend to suicide, of which I received no support in the facility, thus I am trying to process grief and suffering with PTSD. I am going through periods of anxiety and struggling to sleep. When I do sleep, I am having these horrible nightmares of being stranded, locked up, punished, tortured, forgotten and chased. I am always trying to escape or run from someone trying to do me harm. This experience of being locked up and treated so badly, has definitely messed with me mentally, emotionally and financially.”

“We were treated like criminals. Lockup up and exposed, threatened and bullied. Did it leave an impact? Unfortunately, yes. Two weeks later I still have nightmares of being chased, locked up, threatened, hunted down etc. I do not sleep well. I get emotional every time I relive what our children went through. The nasal and oral COVID-19 testing procedure was extremely emotional. Some of the children collapsed under the pressure and anxiety. My own 3-year-old daughter had to be held down by five people to get the nasal swab done; they also had to perform the procedure three times as she was kicking and screaming.  By then I thought she was going to have a seizure. Before this incident, she had a fear of doctors. I can only imagine how this will impact her going forward. When we at a later stage walked past the place where the procedure was performed (outside the office building on the stoep), she started screaming hysterically. My generally happy-go-lucky kids are starting to settle down now. However, up until this point they were unnaturally aggressive, constantly crying and completely out of sorts. My 3-year-old suffers from separation anxiety all over again and reaches out to me constantly for comfort.”

“The anger whilst being held in custody, and treated like hostages with no rights, had a significant impact whilst being in the facility. Was it not for my family and my love for the Lord, I would have wanted to act completely irrational and out of control whilst being locked-up. Sleeping patterns were affected after the quarantine ordeal, including nightmares.”