Children do benefit from having a working mom 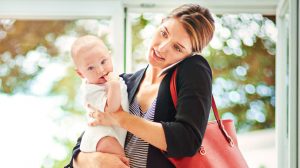 Here’s some heartening news for working mothers worried about going back to work after the festive season has ended – especially if you are the mother of a daughter.

According to research headed by Kathleen McGinn, Professor of Business Administration at Harvard Business School, “there are very few things, that we know of, that have such a clear effect on gender inequality as being raised by a working mother”.

It turns out that the so-called ‘working-mother-effect’ actually improves future prospects, especially for adult daughters of mothers who worked outside the home before their daughters were 14 years old, according to the findings.

“It didn’t matter to us if she worked for a few months one year, or worked 60 hours per week during your whole childhood,” McGinn says. “We weren’t interested in whether your mom was an intense professional, but rather whether the child had a role model who showed them that women work both inside and outside the home.”

The researchers controlled for factors including age, marital status, religion, years of education, urban versus rural dwelling and Domestic Product in the respondent’s home country, among others.  “Stripping those things away, we focused on the outcomes of being raised by a mother who worked outside the home. The direct effects are significant across the board,” McGinn says.

“These findings imply that denying women the opportunity to pursue fulfilling careers outside the home is counterproductive – not only for the future of their children but for society as a whole,” observed Harvard Business School professor Robin Ely, the Gender Initiative’s faculty director and the School’s Senior Associate Dean for Culture and Community.  “So much of what people think they know about gender is simply not substantiated by empirical evidence, but instead is based on gender stereotypes.”

Children of both genders seem to benefit from a mom working outside of the home.  “Our analyses find that sons raised by an employed mother are more involved at home as adults, spending more time caring for family members than men whose mothers stayed home full-time,” the study reported.

Belinda Phipps, chair of the Fawcett Society for Women’s Equality, says that in the light of these research findings, women are still “doing it all, but not having it all”.  She underlines that we must shift cultural attitudes to achieve full gender equality.

“What is clear is that making the workplace more family-friendly, improving the availability and quality of part-time work and flexible working hours, as well as investing in childcare, are vital to helping individuals achieve a full work-life balance,” she adds.

Harvard Business School. 2015. “Having a Working Mother Is Good For You”. http://www.hbs.edu/news/releases/Pages/having-working-mother.aspx

Adams, R. 2015. “Having a working mother works for daughters”. The Guardian,