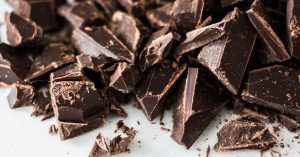 Perhaps you don’t have a crackling fireplace and a glass of sherry, but what about a mug of hearty, warm hot chocolate or a few squares of dark chocolate without feeling guilty, because chocolate is good for you provided you can handle the sugar content.

Chocolate picked up a bad name because of its high fat and sugar content and is associated with obesity, acne, hypertension, coronary  diseases and diabetes, but more and more studies suggest that a regular intake of dark chocolate holds health benefits and that various antioxidants in chocolate have a positive and healing effect on hypertension and cholesterol deviations.

Cacao is used in several snack products. The most common is in chocolate sweets. While milk chocolate has a high fat and sugar content, dark chocolate is healthier because it contains several powerful antioxidants.

A 2013 Dutch study claims that the antioxidants decrease cholesterol, prevent cognitive deterioration and decrease cardiovascular diseases. Research by the Harvard Medical School claims that two cups of a hot chocolate drink per day keep the brain healthy because chocolate promotes blood circulation and  can decrease loss of memory in older people. In addition, chocolate can lower bad cholesterol (LDL) by one third, and by eating 30g of 84% dark chocolate for eight weeks (see Jafaridad) the inflammatory biomarkers in humans with Type 2 diabetes can be lowered.

Cacao is obtained from four- to ten-meter-high trees in the forest area between Mexico and Guatemala, and now also in West Africa. This was the tree of the Maya gods and the pods were regarded as more valuable than gold and was also used as a money unit. The Mayas roasted the seeds in clay pots, ground them and then added boiling water to the powder and whisked it well. To this was added red-pepper powder, nutmeg or honey, and there you have the original recipe for the drink of the gods. Add maize meal to this and you have a high-energy drink for soldiers.

The first task of the nuns who did missionary work in Central America, was to wean the population from this diabolic drink – diabolic because of the added spices and because they believed that the drink was an aphrodisiac. They replaced the spices by vanilla, sugar and cream, and this was the precursor of the present-day hot-chocolate drink. The drink – stirred with a cinnamon stick – later became so popular among the elite that it was served in church by the family’s servants.

Should you feel just a little bit guilty when you succumb to chocolate, think of the slender Catherine Hepburn, who said: “What you see before you, my friend, is the result of a lifetime of chocolate”, but remember that what she spoke of probably was dark chocolate, the fat content of which comes from the bean itself and not from dairy products, contains little sugar and is made of 70–100% pure cacao.

Chocolate/cocoa and human health: a review