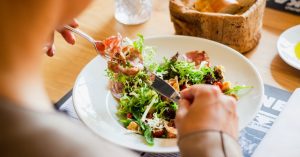 Eating disorders affect 9% of people worldwide, mostly women and girls. However, men and boys aren’t excluded. One out of every four children who are diagnosed with anorexia nervosa is male. Teenage girls are more inclined than other groups to develop eating disorders.

The seriousness of eating disorders should not be underestimated. These conditions go hand-in-hand with mental illnesses, of which serious depression is the primary underlying illness, followed by anxiety disorders and obsessive-compulsive disorders. It has been found that people with anorexia nervosa have a 56% greater chance of committing suicide than people who don’t suffer from any eating disorders. Eating disorders are also regularly accompanied by the abuse of alcohol and forbidden substances.

There are three main eating disorders:

Anorexia nervosa is a condition where persons are terrified of gaining weight. This can lead to them becoming too thin. Apart from eating too little, they can also exercise obsessively, drink diet pills or take laxatives. They will still feel they aren’t thin enough, and will quite possibly start wearing clothes to hide their bodies.

Someone suffering from bulimia will eat large amounts of food fast, and then go and vomit as soon as possible to get rid of what they have eaten. They feel out of control when they overeat, and will eventually struggle to keep any food down. Such a person could also take laxatives, and exercise excessively. It is more difficult to detect a bulimic person than a person with anorexia, as usually the former is not underweight. It is important to be on the lookout for other signs. The person will overeat regularly and afterwards go straight to the bathroom.

Over-eating disorder is when a person overeats regularly and out of control. This is the most common disorder, and leads to overweight or obesity, which could later on lead to heart diseases, diabetes and high blood pressure.

Eating disorders need not dominate the sufferer’s life. The first step to healing is to consult a doctor. You will then be referred to a psychologist, dietician, or another treatment centre. In the case where a patient suffers from anorexia, it might sometimes be necessary to be admitted to a hospital for a while.