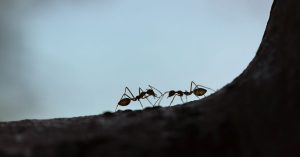 As the impact of the Covid-19 pandemic becomes known worldwide, we are compelled to realise that we are living in crowded cities populated by interactive individuals, and the research by Dr David Phair once more underlines the truth of the words “go to the ant, and be wise”.

Looking at humanity in this light, it is difficult not to notice the parallels between humans and highly social insects such as bees, and especially ants. They live in highly crowded nests packed with hundreds and even millions of individuals, all working to support the colony. They, too, must communicate with each other and perform duties. Some gather food, others manage resources, while still others sweep the proverbial streets.

And, like mankind, they too have to fight the danger of diseases and epidemics. Ants have been fighting this problem for longer than just a few million years. This has given them ample time to develop mechanisms for fighting diseases, for instance their own form of medication. Ants produce secretions with a high acid content that are antimicrobial by nature, similar to the disinfectants that we use so lavishly.

Researchers have found that ants and other social insects use certain social codes of conduct to ward off diseases in colonies, also known as social immunity.

Dr Phair’s research focused on the reaction of three South African ant species when they are threatened by disease, namely the well-known pugnacious ant, sugar ants or balbyters, and the ordinary angry ant. Although all of them react differently to exposure to diseases, none of them implemented a full lockdown.

From quarantine to seeing a doctor

The pugnacious ants used a variety of social-immunity mechanisms to prevent infections and relied heavily on social intervention. So, for instance, they introduced a form of quarantine: ants exposed to the infection did not enter the chambers of the queen or the juveniles. They were generally restricted to the nest chamber closest to the exit. This species also started regular and intense cross-nursing in the form of “doctor’s visits” during which nest mates clean and disinfect those individuals who have been potentially exposed. Here we see an analogue with countries with a high population density where it is important to cooperate to prevent the disease from spreading. The ants acted in a manner similar to countries with strict lockdowns. These ants prohibited interaction between individuals who might probably be infected, and members of the colony who are essential to the functioning of the colony.

No form of quarantine was noticed among the sugar ants. They did, however, maintain social distancing. Of the three species we observed, this group of ants showed the least mutual interaction but rather relied on a self-care approach to prevent spreading, but this was not their only defence against the disease. Sugar ants are well known for their liberal use of methanoic acid, a strong antimicrobial agent presumably used to protect the nest, specifically to protect the nest against pathogens. In one case we noticed new behaviour where one individual who used methanoic acid caused surrounding ants to use their own methanoic acid too. This phenomenon is probably a form of collective disinfection.

It appeared as if the angry ants had a calculated approach based on individual reactions regarding the prevention of infection, as well as group reactions such as cross-care.

Of all three species, they showed the best congenital immunity to infections. It is thought that this could be the result of previous experience with disease seeing that they occur in wetter areas and are therefore more exposed to microbial organisms and pathogens in the environment.

This species’ reaction can be compared to countries that went through previous epidemics and could therefore act faster and more efficiently in limiting the spread of the Covid-19 infection.

What do ant colonies do differently?

Although there are many similarities between ants and humans, there are also clear  differences. Many people can be described as selfless, prepared to put their own lives in danger in an effort to protect others. However, compared to ants we still have a lot to learn.

Most ants will do their utmost to protect the colony and there is little or no room for selfish ambition in the functioning of a colony.

Therefore, the lesson the ants teach us, is: work together to temper the spread and impact of the Covid-19 pandemic. We should put our own interests on the back burner, cooperate and do what is best for the community.

Dr David Phair, a myrmecologist at the Stellenbosch University’s Department of Botany and Zoology