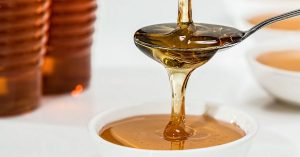 Honey is nature’s superfood and was farmed by the Egyptians more than 3 000 years ago. The product was so highly rated that flasks of it were buried with the deceased for use in the hereafter for the healing properties of honey, which was already known then. So highly was the modest bee regarded that it became an Egyptian holy symbol of femininity.

The healing power of honey is well known. In India it is used in ayurvedic medicine, and in the Middle Ages it was used for gastric and intestinal complaints. Hippocrates recommended it as a cough remedy, for blocked airways, and for healing wounds, and in Egypt it was used, inter alia, to heal small-pock marks.

Nowadays the medical healing properties of honey are celebrated in cosmetic products and plasters. Manuka honey, from New Zealand, is the only honey recognised by any country’s health authorities for use in medical products such as ointments and wound plasters, specifically for its antibacterial action. The honey derives from the Leptospermum plant, also known as the New Zealand or Australian tea bush, which grows lavishly in sparsely populated parts of New Zealand where the trees are not contaminated by chemical toxic substances. Just as the quality of wine and champagne is determined by a certificate and prize, Manuka is also graded by a UMF (unique manuka factor) rating that shows the purity and origin of the product. It has been found that this special wonder honey has an inhibiting effect on 60 species of antibiotic-resistant bacteria.

Archaeologists regularly find sealed flasks of honey at excavation sites where the honey shows no sign of deterioration, crystallisation, colour or taste deviations although it had been stored for thousands of years without pasteurisation. The secret is in die magical composition of honey: sugar, acid, absence of water and the presence of hydrogen peroxide. The sugar is hygroscopic, which means that honey in its natural state contains very little moisture but can absorb moisture if left unsealed. Although the nectar that is collected has a high moisture content, the bees make short shrift of it by making the moisture content evaporate by flapping their wings 230 times a second. For honey – or any product – to decay bacteria must be present and the acid content of honey is between pH3 and 4,5, which is sufficient to kill bacteria. To further contribute to this waterless, dense acidic environment sufficient hydrogen peroxide is necessary to create an environment that is inhospitable to bacteria and micro-organisms. The hydrogen peroxide is produced when an enzyme, glucose oxidase, present in the intestines of the bee breaks down the nectar into gluconic acid and hydrogen peroxide when the bee regurgitates the honey into the honeycomb.

Honey should rather not be given to babies and children under the age of one year because it could cause child botulism, which could affect the nervous system.

But we should always bear in mind that honey is first of all produced to feed other bees working in the honey-pollination-fruit cycle and not to provide exclusively in man’s needs.

7 Health Benefits of Manuka Honey, Based on Science

The benefits of knitting and crocheting for young people