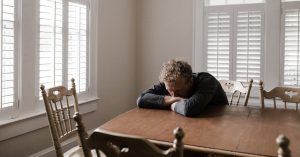 Everybody has heard the saying that men don’t cry, but according to mental health experts this historical gender-based norm of encouraging men to suppress their feelings and act strongly has a devastating impact on the male population.

Boys are instructed from a young age not to show their feelings. “This includes sayings such as ‘take it like a man’. Men will also rather suggest a visit to a bar to discuss an issue.”

According to Oosthuysen some parents teach their children, especially boys, not to show emotion. This sends out a message that certain feelings are a weakness, while in reality the real strength lies in showing emotion and dealing directly with difficult experiences. It is also important to be careful with what we show young people and how this affects their vision of themselves in the world,” he says.

Loyiso Maqubela, a clinical psychologist at Akeso Milnerton, says men experience a “silent crisis”. According to the World Health Organisation men in South Africa are four times more inclined to take their own lives than women. “This has to indicate that depression figures among men are much higher, and yet we see considerably more women than men looking for help with depression ,” he says.

The way in which men give vent to mental health issues could probably be seen as disorderly conduct while it is actually indicative of something else. “Anger and frustration, progression to physical violence, alcohol and drug abuse and similar behaviour can often be associated with suppressed mental health issues and could point to depression.”

According to Maqubela men are confronted by a double-edged sword when they feel it is problematic to seek help as this would be in conflict with the community’s idea of what a “strong” or “masculine” man should be. “On the other hand, a man could feel that he is alone and cannot understand if he does not get the necessary professional help.”

Maqubela also points out that men and women sometimes experience big changes in their lives that could cause mental health problems. This includes a marriage, becoming a parent, moving house, changing careers, a divorce, losing your job, change in financial status, or the loss of a loved one.

“These types of events could affect your own view of yourself and could cause a very broad variety or a particularly intense feeling of emotions. It is important that the person concerned must be able to express and address these feelings,” says Maqubela.