WerkNet
Your Family
Your Career
Your Health
Your Money
You and the Law
Occupational Guilds
Solidarity Youth
S-Leer
Home / General / Red meat: Good or bad? 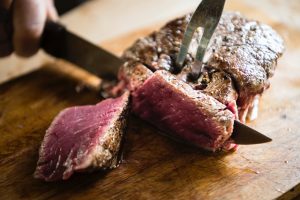 The debate about whether red meat is good or bad has been going on for years, with new research on both sides of the spectrum being published regularly.

Some researchers maintain that red meat contains important nutrients such as protein, vitamin B12, and iron. On the other hand there is proof that the risk for certain cancers and heart diseases increase if one eats too much red meat.

Red meat is usually classified as muscle meat from cattle, pigs, sheep or other mammals. According to research, lean cuts of unprocessed red meat, fillet for example, are the healthier option because they do not contain unnecessary salt, fat or preservatives. Processed red meat such as bacon, ham and biltong appear to hold the biggest risk for health problems, according to other researchers.

In 2015 the World Health Organisation (WHO) officially classified processed meat as carcinogenic for humans ─ in the same class as tobacco smoke, asbestos and air pollution. A consistent connection between colorectal cancer and the eating of processed meat was found.

According to these findings processes to enhance the flavour of meat or to preserve it, such as drying, smoking or salting, lead to the formation of carcinogenic chemicals.

Some types of red meat contain a lot of saturated fats, which can cause cholesterol to rise, with a bigger risk of heart disease.

It is thought that red meat cooked at high temperatures, such as barbecueing it, contributes to a higher risk of cancer. Allegedly this is due to the carcinogenic compounds that form when one fries meat over open flames or in a pan.

With this in mind, people are advised rather to choose lean red-meat cuts for frying and to use moderate or indirect heat rather than high heat.

Most of the red-meat studies are observational studies, which are designed to trace associations but cannot prove causality.

The South African dietary guidelines are that fish, chicken, lean meat or eggs can be eaten every day and that one should not eat more than 560 g of red meat per week (approximately 80 g to 90 g a day. Chicken and fish have less saturated fats than most kinds of red meat.

However, there is still an ongoing debate on how saturated fats affect health.