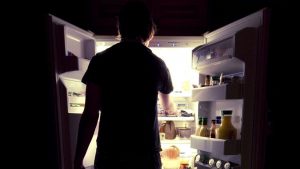 Sleep-related eating disorders are eating disorders similar to anorexia and bulimia and are characterised by abnormal or strange nocturnal eating patterns. Most of us wake up somewhere during the course of the night, but usually we quickly fall asleep again after drinking a glass of water or visiting the bathroom. For some people, however, it is a sign that they should visit the kitchen for a snack – a bowl of corn flakes, a peanut-butter sandwich or some ice-cream. Unfortunately, when they return to bed, it does not mean that they are going to get the rest of their night’s rest. These individuals can wake up a number of times with an urge to eat.

As a result of this nocturnal eating such a person does not want breakfast and sometimes it can take hours before they eat again. The cause of nocturnal eating disorders is still unclear because of conflicting research findings. Those who suffer from it, suffer from various levels of anxiety and depression and many have stressful lifestyles. Family conflict, loneliness and personal crises are also commonly found.

Nocturnal sleep-related eating disorder (NS-RED) occurs in cases where the person walks in his sleep. People like these often sleep-walk to the kitchen and prepare food and afterwards cannot remember that they did it. If this sleep-related eating disorder happens regularly, the person can begin putting on weight with an increased risk of Type 2 diabetes.

Nocturnal eating syndrome (NES) is a closely related disease that is diagnosed when a person eats during the night while being fully conscious. However, this must not be mistaken for the typical midnight snack. NES sufferers are plagued with insomnia at least four to five times a week and they believe that they will not be able to sleep again unless they have eaten something. While NES is characterised by excessive eating by night, it is not necessarily binge eating either. People suffering from NES are often top performers. Their strange eating patterns may, however, affect their ability to socialise or manage work-related responsibilities.

The following are symptoms of NES:

NS-RED and NES are different because people with NES eat while they are aware of it, while people who suffer from NS-RED are unaware of their nightly eating. However, the disorders are similar in the sense that both are mixtures of sleeping and eating disorders. Both these conditions can interfere with an individual’s nutrition, they cause embarrassment, and they lead to depression and weight gain.

Who gets sleep-related eating disorders?

Men as well as women are vulnerable to these diseases, but they are more prevalent among women. It is estimated that one out of every 100 people suffer from NES. Approximately 5% suffer from NS-RED. The number of people affected by these diseases grows by up to 17% compared to those with other eating disorders. Many of these individuals diet by day. This can make them hungry and vulnerable to eating at night because sleep weakens their control. In some cases people with sleep-related eating disorders have a history of alcoholism, drug abuse and other sleep disorders.

How are sleep-related eating disorders treated?

The treatment of sleep-related eating disorders starts with an interview and could include sleeping over at a sleep laboratory where the brain activity is monitored during the night. Medication can be of help sometimes for these disorders – sleeping pills, however, must be avoided because they can cause confusion and clumsiness, which could lead to injuries.

It would appear that ghrelin, the “hunger” hormone normally released by day – when we are supposed to get hungry – is released late in the evening in NES sufferers and during the night. One solution researchers are looking at is returning the ghrelin release pattern by exposing the patient to light early in the morning.

A supplement with melatonin is something else that NES sufferers could consider. Some studies have found that in NES sufferers this sleeping hormone is not as high as it should be late at night. This could possibly be the reason why nocturnal eaters wake up so easily at night.

Anxiety and depression can also be coupled with NES. It is unclear, however, whether this is the cause or effect of disturbed sleep. Additional treatments could therefore include methods of getting rid of tension and anxiety. Examples of these methods include classes teaching the effective management of stress, training in self-awareness, counselling, and limiting alcohol and caffeine intake. Some experts also recommend antidepressants that boost serotonin activity to lower anxiety and depression to sufficiently calm the individual for further sleep.

There is, however, a more natural remedy that will help with sleep as well as hunger and mood disorders – a cup of low-fat, slightly sweetened breakfast cereal that can be eaten as soon as you wake up during the night. The carbohydrate will increase the serotonin and so bring about relaxation, satisfaction and a calmer mood.