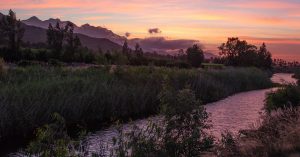 In our daily helter-skelter and hustling from point A to point B silence is a scarce commodity. Silence is actually a time to breathe deeply and experience peace and calm.

We are so driven by time and appointments that we sometimes simply forget to become silent. Not all of us have the luxury to go for a walk in nature after work and to experience peace and calm in silence.

Some people prefer to go to a retreat for a weekend, but to others a walk through a botanical garden, a meander along a mountain or simply a walk by the sea is more than enough. To them this tranquillity is sufficient.

Take the time to make a special corner in your garden where you can simply sit and listen to the sound of water and birds, a place where the rest of the family know not to disturb you. This is more than enough to make your mind slip into calmness.

A new study has confirmed that spending time in nature has great physical and emotional benefits.

It has been found that communities with greater exposure to green spaces report better general health, according to data collected among more than 290 million people. According to the researchers they found that time spent in nature undoubtedly contributed making us feel healthier.

This data was obtained from 140 studies carried out in 20 different countries, including the United Kingdom, America, Spain, Australia and Japan. Green spaces are defined as open, undeveloped areas with natural vegetation, as well as urban green areas such as parks and green streets. Research was done on how the health of people with little or no access to green areas differed from those who did experience exposure.

They found that it contributed to a lower risk of Type 2 diabetes, cardiovascular diseases and premature births, while it also helped people to sleep better and resulted in lower blood pressure, heartbeat and stress. A very interesting finding was that it contributed to lower levels of salivary cortisol ─ a physiological indicator of stress.

These findings are of particular interest if one takes into consideration that millions of workdays are lost every year due to stress, depression and anxiety. In the United Kingdom it is estimated that as many as 1,7 workdays annually are lost due to these factors.

In Japan forest bathing is becoming more popular ─ this entails that people spend time in a forest merely by sitting or lying there, or just wandering around in the forest. The results show that this is probably the way to go.

However, it is not yet clear what the link between green spaces and good health is. It could probably be ascribed to physical activity and socialising that take place in green spaces. Research in Japan also points to a possible link between organic substances with antibacterial properties released by trees.

According to the researchers we are inclined to take medication immediately when we don’t feel well. However, exposure to an environment beneficial to health is increasingly being seen as a better alternative. It is necessary to get out of built-up areas and to walk in nature and get rid of a highly strung mindset after a day’s work.

So, what are you waiting for when the day’s stress is overwhelming you? Pick a leafy spot and take a walk, or work on that special corner in your garden.