Talking with someone who is dying 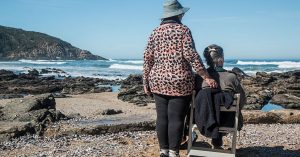 A beloved spouse or friend is dying, and, humanly speaking, the time to talk about important matters is diminishing. Still, for various reasons you and the dying person are shying away from initiating a conversation.

Why are people hesitant to talk to a dying person?

Fear that you will say the wrong thing and worsen the situation; denial – you refuse to accept the approaching death; fear of how other family members will react; fear of your own mortality; feelings of guilt or shame about what happened in the past.

Why will the dying person not talk?

Reluctance to burden family and friends with his emotions; lack of privacy in the hospital; inner conflict and unresolved matters; families who have disintegrated or are characterised by conflict; secrets never shared with family members; fear of upsetting the family or friends by starting to cry; denial – refusal to accept that he is dying. It could also be that the dying person’s condition has deteriorated to such an extent that he is no longer physically able to talk.

How to begin a conversation

Sometimes the dying person will indicate himself that he wants to talk by asking question, such as: Do you know that my illness in incurable/that I will die soon? What do you think happens with a person after his death? Do you think God really exists? Listen attentively. Show through your body language that you are truly listening and paying attention. Lean forward, look him in the eye, hold his hand, listen to his tone of voice, be aware of his body language. This gives him the assurance that you truly care and take his interests to heart. In difficult situations we often search for the ‘right’ or ‘clever’ thing to say. Be respectful and don’t force your opinion on him. Be honest if you know the answer, or admit that you don’t know and will find out.

If he does not initiate the conversation himself, encourage him with statements/questions such as: I know that (humanly speaking) you don’t have long to live – how do you feel about that? Who must I contact if your condition worsens? Who must be with you when you die?  Who must conduct your funeral/memorial service?  Is there something you want to talk to me about? Is there someone you would like to talk to before you die or to whom you want to send a message? Are you ready to die? Even if initially he refuses to talk, he will know that you care, are there for him and willing to listen when he feels prepared to do so.

It is important to not force him to talk. Respect his silence until he indicates that he has a need to talk.

You encouraged the dying person to talk and it might have led to meaningful discussion and helped him to say what was on his mind, or wait for him to talk when he is ready. There might also be something you have on your mind. Tell him and ask him if he will be willing to listen to you. Whatever you want to get off your chest, stay calm so that you don’t upset him.

Don’t bring up insignificant incidents from the past. However, there might be something that happened in the past about which neither of you have up until now could or would not talk, due to the emotional nature thereof. Remind him of the incident, say that you are sorry about your share in the discord and unhappiness and ask him to forgive you. Whatever his reaction, you will be more at peace and be able to get on with your life without qualms of conscience.

The dying person might have been walking around for years with the burden of your lack of forgiveness. Absolve him and say that you forgive him.

Probably he meant a lot to you in his lifetime and touched your life in an exceptional way. Thank him for it – be specific. It will give him a feeling of dignity. Anyone would like to know that his life held meaning for others, especially those who were important to him.

It’s never too late to tell someone you love him. Even if in the past you were never actually demonstrative regarding your emotions and did not say it regularly, do it now, even if he knows it. Anyone wants to know that he was and is loved. Even though you know it might lead to emotional, teary moments, tell him you will miss him.

When you know that (humanly speaking) the end is near, treat each farewell as if it were the last. This will prevent you from for the rest of your life regretting what remained unsaid. You need not be syrupy or sentimental, but leave the person with the knowledge that he will always be important to you. If you live far away from him and know that it is unlikely that you will see him again, be honest. Tell him you don’t know if you will see him again. This will leave both of you with peace in your heart that the last moments were precious.

The dying person often clings to the last lifeline because he does not want to upset his loved ones who are staying behind. Reassure him that he may ‘let go’.

Sometimes words are superfluous. You have told each other what you needed to, but your quiet presence with a soft touch can say and mean more in the last moments than a torrent of words. It is an exceptional way of saying, ‘I am here; you are not alone’.

Even if it is difficult, the last conversation could be liberating for you as well as the dying person – for him it can ease the dying process and for you staying behind it can make the mourning process easier.

Your eyes and the use of computers

What is emotional maturity?

Stop looking at your phone

Early signs that warn me I might be ill