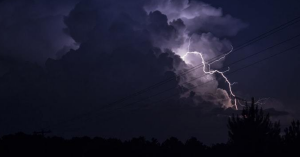 There are few things as beautiful as lightning dancing between clouds on a warm summer’s evening. Our grandparents treated lightning with the greatest respect and took all sorts of precautions to prevent themselves from getting struck. Nowadays, however, most people are not careful enough and treat thundery weather like light rain.

What is the truth behind the dangers of lightning?

Every second the whole planet is struck by lightning more than a 100 times. Lightning is lethal, or could cause cardiac arrest. Injuries could include serious burns, damage to nerves, permanent brain damage, loss of memory and personality changes. It can affect all your organs. Ten percent of victims do not survive the strike, with 70 percent suffering serious long-term effects.

Most people do not realise that even with a blue sky they could still be struck. Lightning can strike a person up to 16 kilometres from the centre of a storm.

If you can hear the thunder, it means that you are less than 16 kilometres from the storm and could be struck. Find shelter and avoid dangerous situations.

Light beams move faster through the air than sound waves. You will therefore see the lightning before you can hear it. Count the seconds from when you see the flash until you can hear the thunder. This gives an indication of the distance. If the time lapse is less than 30 seconds, the storm is closer than 10 kilometres from you and dangerous, and you need to find shelter.

Wait 30 minutes after the last thunder clap before leaving your shelter. The silence does not mean that you are out of danger immediately.

Lightning usually strikes the tallest object in an area. If you are outside during a thunder storm, it would be best to avoid tall trees and telephone poles. Even if you are not standing against the tree or pole, the electricity could still reach you. Rather take cover under groups of smaller trees if you are in a forest. Also avoid large open areas where you are going to be the tallest point.

Tents offer no protection against lightning.

Water is a very good conductor of lightning. Stay away from the swimming pool and other wet items.

Rubber soles on shoes do not protect you against lightning.

Do not take cover under an umbrella or a lean-to. They will not protect you at all. Your house has metal pipes and gutters that can divert the electrical load from you. A lean-to does not have them.

A motor vehicle can offer protection. However, do not touch the metal sides. The metal roof and sides keep the electricity away from you.

Stay away from underground pipes if you know where they are and do not lie on a cement floor as it could contain iron poles and pipes you cannot see.

Do not lie flat on your stomach in the veld if there is no shelter. Crouch with your head between your legs while you cover your ears with your hands. Stay in this position until the thunder has passed.

If you are inside your house, stay away from windows and doors and avoid anything that could conduct electricity. Most people injured inside their houses by electricity are talking on their landlines when it happens. Make sure that all electrical appliances are unplugged. Do not touch any water pipes or taps. It is therefore not a good idea to take a bath, shower or do washing in thundery weather.

You do not have to cover your mirrors. They do not attract lightning. It is not necessary to remove all metal from your body as it will not make you more vulnerable.

You can touch a person immediately after he was struck by lightning. There will not be an active load and you will be able to help him immediately by means of mouth-to-mouth resuscitation.

Eyecare: Everything about glaucoma

Woozy all the time? Here’s why