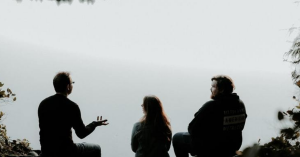 We live in the most prosperous age in history and yet young people are unhappier than ever.

Thus, although people have more comforts at their disposal than ever before, it seems that their emotional satisfaction levels have shown an inverse correlation to their material wellbeing.

But before we get to the reasons for this phenomenon, let’s take stock of just how bad this picture really is.

The US suicide rate quadrupled for males aged between 15 and 24 and doubled for females in the same range between 1946 and 2006. Data from the National Survey on Drug Use in the US shows a 71% increase in serious psychological distress in young adults from 2008 to 2017, as well as a 52% increase among teenagers aged 12 to 17.

Reuters Health reported the following in a study on the topic in 2019: “Suicidal thinking, severe depression and rates of self-injury among US college students more than doubled over less than a decade, a nationwide study suggests.” The study coauthor Jean Twenge, a psychology professor at San Diego State University, said that this “suggests that something is seriously wrong in the lives of young people”.

In South Africa, bleak economic and work prospects, crime, corruption and racism all undoubtedly contribute to the malaise felt by many young people, but there are more universal factors at play, too.

In 2018 the World Federation for Mental Health (WFMH) claimed  the following: “Young people are spending most of their day on the internet – experiencing cyber crime, cyber bullying, and playing violent video games. Suicide and substance abuse numbers have been steadily rising.”

Prager says there are any number of reasons for the despair and despondency among young people. “Increased use of illicit drugs and prescription-drug abuse, and less human interaction because of constant cell-phone use are two widely offered, valid explanations. Less valid explanations include competition and grades anxiety.”

There is wide consensus among experts that the rise of social media and increased smartphone usage have played a major part in causing discontent among impressionable young people. Social psychologist, writer and speaker Dr Jane Adams says the time during which younger teenagers spend face to face with their friends declined between 2008 and 2017. This happened while their time online, along with their exposure to suicide-related content, increased.

A 2018 study conducted by the South African Federation for Mental Health found that although social media connects people, it causes other damage. “People often post almost exclusively happy moments, making it appear that their lives are going particularly well. Indeed, this may sometimes be the case, but often it is a fleeting or staged moment not representative of their complete reality.

“This might in turn inspire jealousy or an inferiority complex on the part of people whose lives are not going particularly well. It can make one feel as though they cannot compete, and the nature of what is posted can make it appear as a competition.”

She also identifies the decline in sleep duration as a problem. Compromised sleep is a major risk factor for mood disorders. Teenagers and young adults are on their phones at all hours of the day and this disturbs their sleep patterns and ultimately impairs their mental health.

Across the board, young people want their gratification to be instant and this cheapens it – more kicks, less impact and gratification. This lack of self-discipline, along with ubiquitous social media use, leads to many young people struggling academically or failing to hold down a job. This in turn could hurt their sense of self-worth and mental health. And because of the isolation and loneliness experienced by many young people, they fail to make meaningful normal friendships and even romantic relationships.

Prager cites the loss of values as the chief reason. He argues that “middle class” values have come under increasing assault and have had wider societal effects. These values include getting married and then starting a family, delayed gratification, self-discipline and getting a job to sustain one’s family.

Jane Adams, 6 May 2019, “Why so many young people today are depressed”, https://www.psychologytoday.com/us/blog/between-the-lines/201905/why-so-many-young-people-today-are-depressed.

Reasons why you still feel fatigued in the morning

Does stress keep you awake at night?